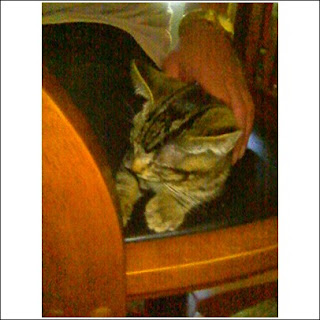 Don't you love this blog? Immediately after making the last post, all hell broke loose here at the fabulous Manatee Cat Diner. The girl next door was being strangled by her boyfriend as the daily thunderstorm erupted. I dragged her outside and told him to get lost, then called the police. They arrested him down the road for DUI and assault, so he's in plenty of trouble. Then, I heard a cat crying and managed to lure this little female with a bowl of food as the sky dumped rain. Yesterday was the 36th consecutive day of rain in our state; actually, the ground hasn't been dry for four months, which is something I've never seen. Drought conditions have persisted here for the last 30 years; so, when Jim Inhofe says climate change is a myth, you can know he's suffering from a defect in perception.

Anyway, I got back inside about 3 a.m., soaking wet as was this kitten. She's five or six weeks old and was suffering from full conjunctivitis. I got some medicine from the vet which she refuses to let me administer, so sister-in-law Janet comes and wraps her in a beach towel like a little kitty mummy and forcibly administers the goo and drops. The cat is feeling much better and keeps me awake all night attacking my toes, feet, legs and ass. I named her Mimi. Next week I expect to get Mimi vaccinated and fixed (hopefully), and then she'll be up for adoption, although she is pretty nice and despite the fact the other two cats don't like the way she's taken over the house, I might keep her if a suitable home doesn't present itself.

I'm working on a couple projects for your reading pleasure. One is the state of readiness for war with Iran. I've dug for material all week for the story, and all I can say is while it should be readily available, the people who know aren't saying much. I learned there were seven (wow) carrier groups doing exercises in the Persian Gulf in 2004. There are supposed to be three now, but I'm having a hard time determining exactly which ones they are. How they are equipped is a bigger question, but there are definite suggestions the armament they carry should have everyone's hair standing on end.

Fortunately, the conservative movement has been dumbing down the world since the 1970s, or people would be curious about it and insisting on putting an end to it, along with demanding the heads of guys like Bush, Cheney, Rumsfeld and Gates. The news has been kind of interesting the past week, but it seemed like a rehash of the same old nonsense. If you get a chance, try to catch Bill Moyer's Journal regarding impeachment, which is new. It's pretty good. I don't know if we'll actually get to impeachment, and the longer we don't the more I wonder why not.
Posted by «—U®Anu§—» at Saturday, July 14, 2007